Hello and welcome to my blog, I know its been a little while since my last blog but its been a busy year and I just wanted to bring you up to date with what???s been happening.
We have been working on a unique project in Sawrey on the West side of Lake Windermere. The project has been to demolish an existing garage and build a new garage that incorporates some accommodation and a boat store.
Initially the site had to be excavated, this involved some heavy work as there was a huge amount of rock to remove. We set the bulk of the stone to one side and recycled the majority by using it in the garden stone work wall features. This is a technique we use on as many sites as possible as it lowers the environmental impact associated with transporting heavy materials and purchasing new quarried stone to replace it.
The building design is oval in shape with a convex to concave nautical feel roofline. 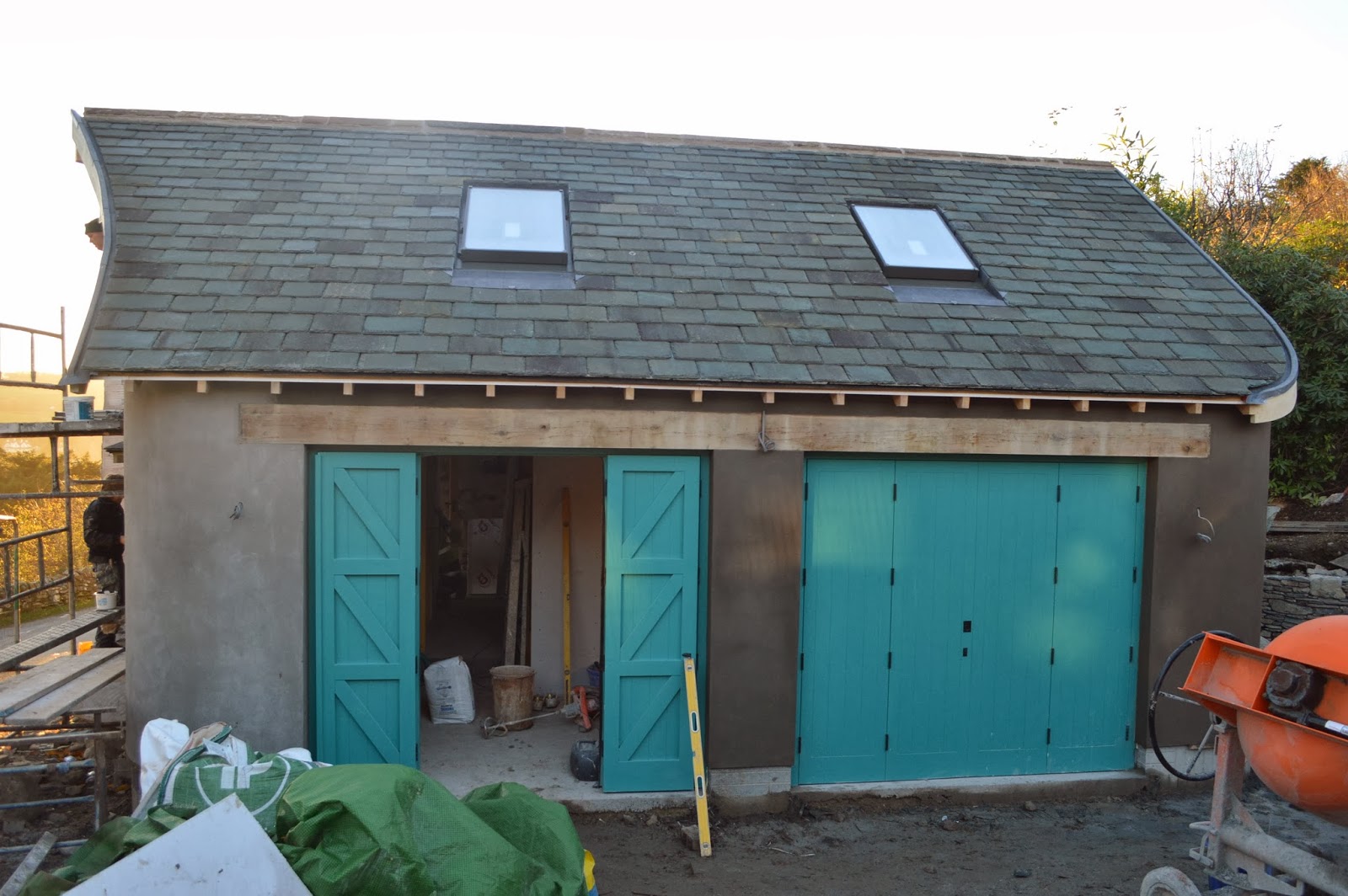 The walls had to be built to a radius which required careful work and extra care over keeping cavities clear and a true radius and of course maintaining the insulation properties.
The unusual roof line had to be formed using a shaped laminated barge board, the ship bow style rakes intergrate well with an arched window in the gable. 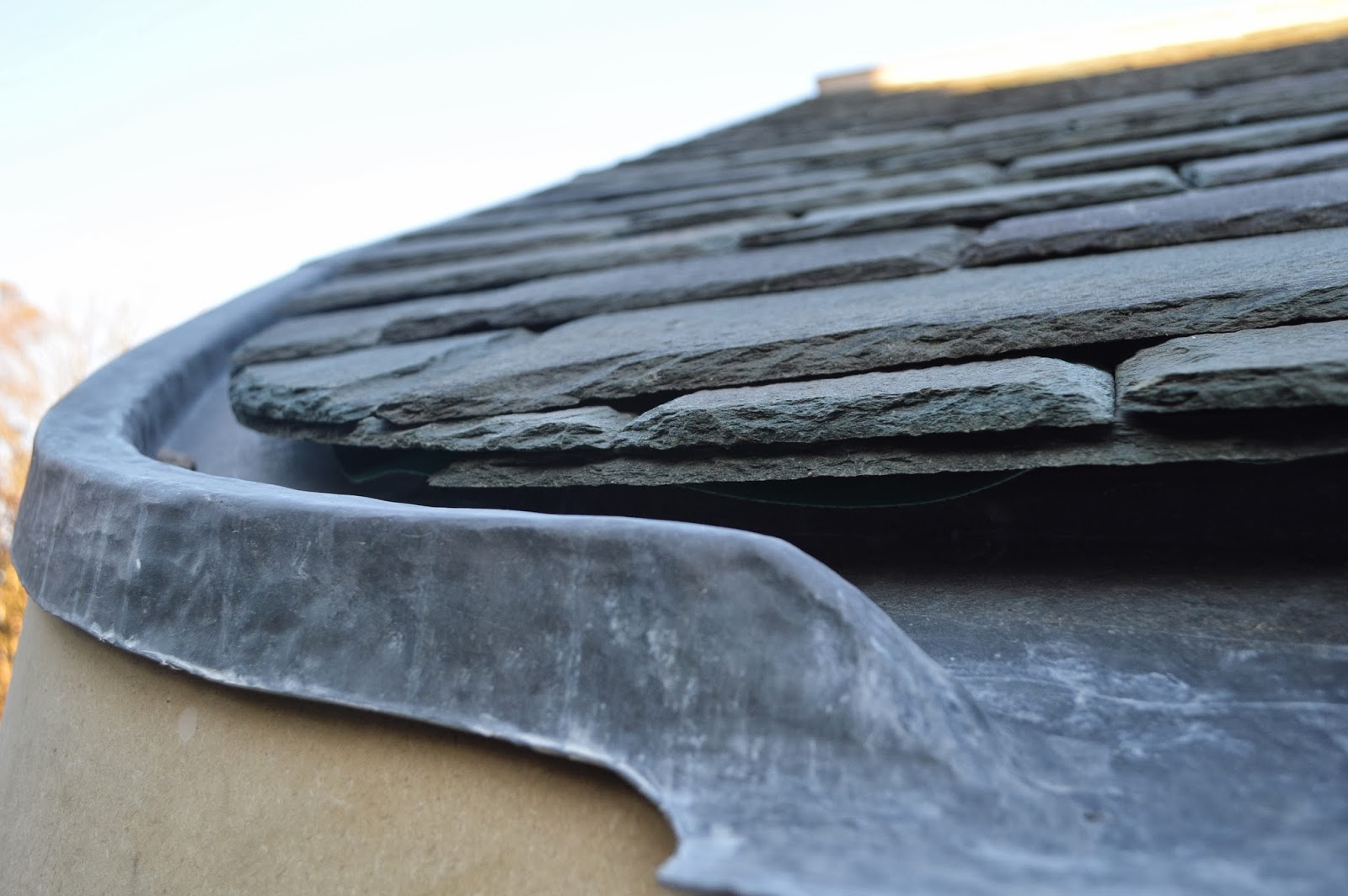 The roof has been constructed in reclaimed green slate which is the most durable and long lasting of the Lakeland slates. This matches in with the existing building and a tradition diminishing course style of slating. No3 Neo roof windows were fitted flush to the slate line which creates a great unbroken finishes roof line. The rainwater run off system was created using secret lead gutters curved to follow the line of the unusual shape eaves. The roof was topped off with sandstone ridge tiles carefully selected to match from several local reclamation yards.
The walls have been finished in lime render and will be finished to match the existing property.
Internally a shower room and wc has been created, an oak starcase leads to the upstairs living space and a vaulted ceiling continues the curved theme.
In the garden and entrance areas, blue slate paving has been used within multi levels of slate steps and walling to create tidy features and natural looking retainment of the embankment
A round plastered pillar detailed with a slate band makes an entrance feature in keeping with the theme of the whole project. 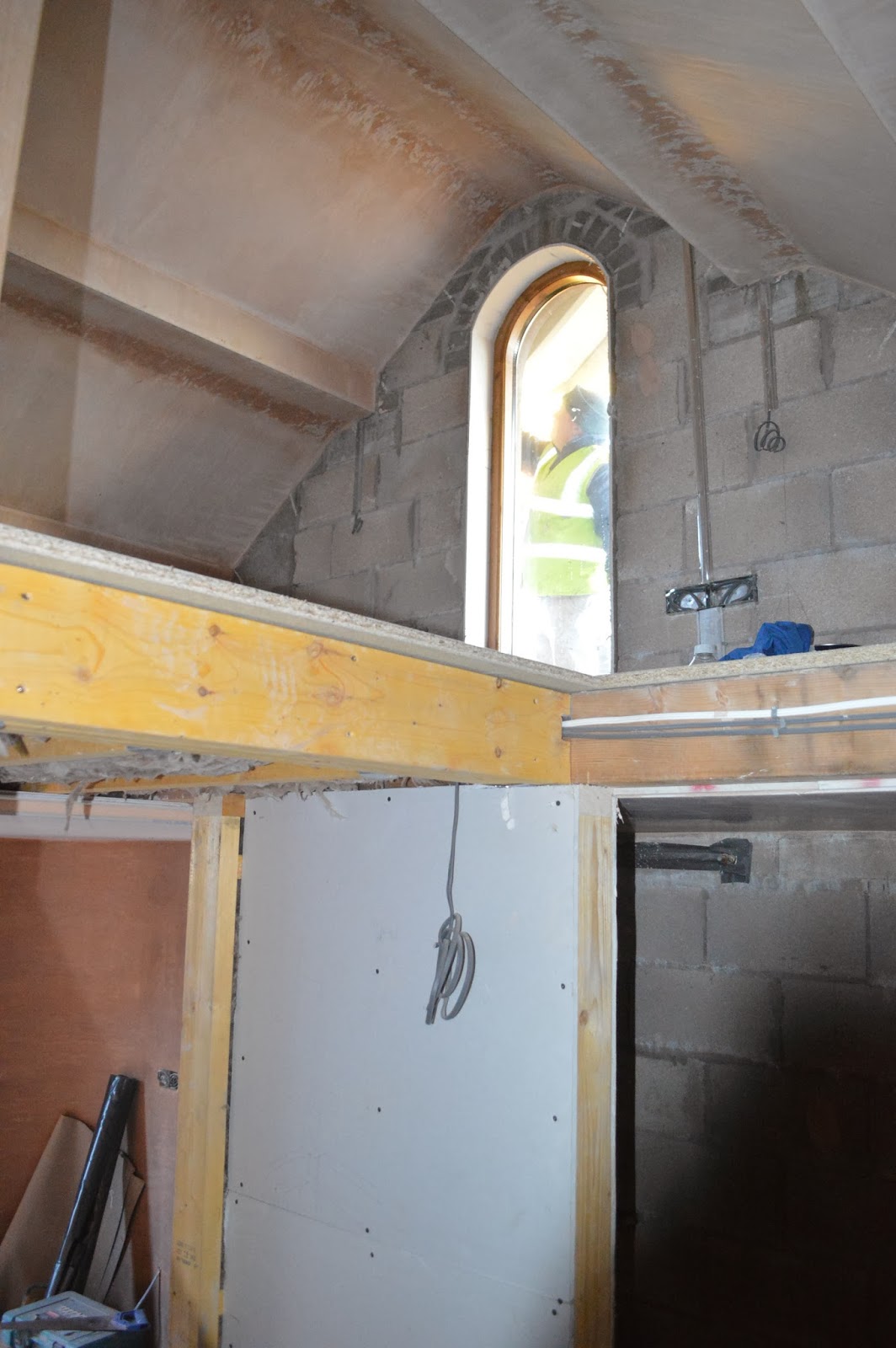 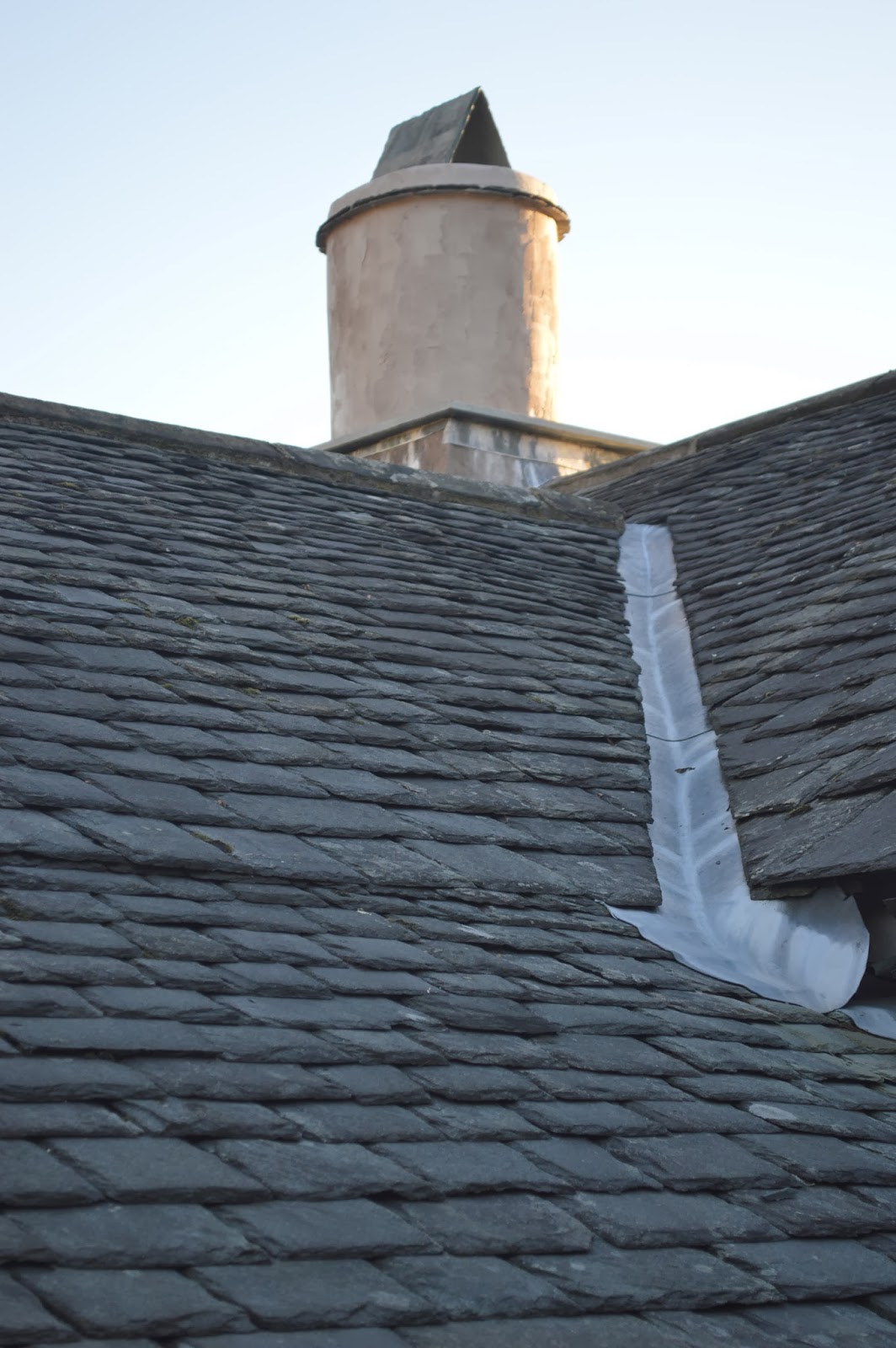 A classic Lakeland chimney stack( Oval in shape )on the existing building was rebuilt ,replacing the existing square chimney that was in poor condition.
We have had the pleasure to work on a large residence on the shores of Windermere. Apart from the obvious advantage of working in a spectacular view, the project has been interesting and challenging. We managed all elements of the build and our skilled team undertook all of the building work. 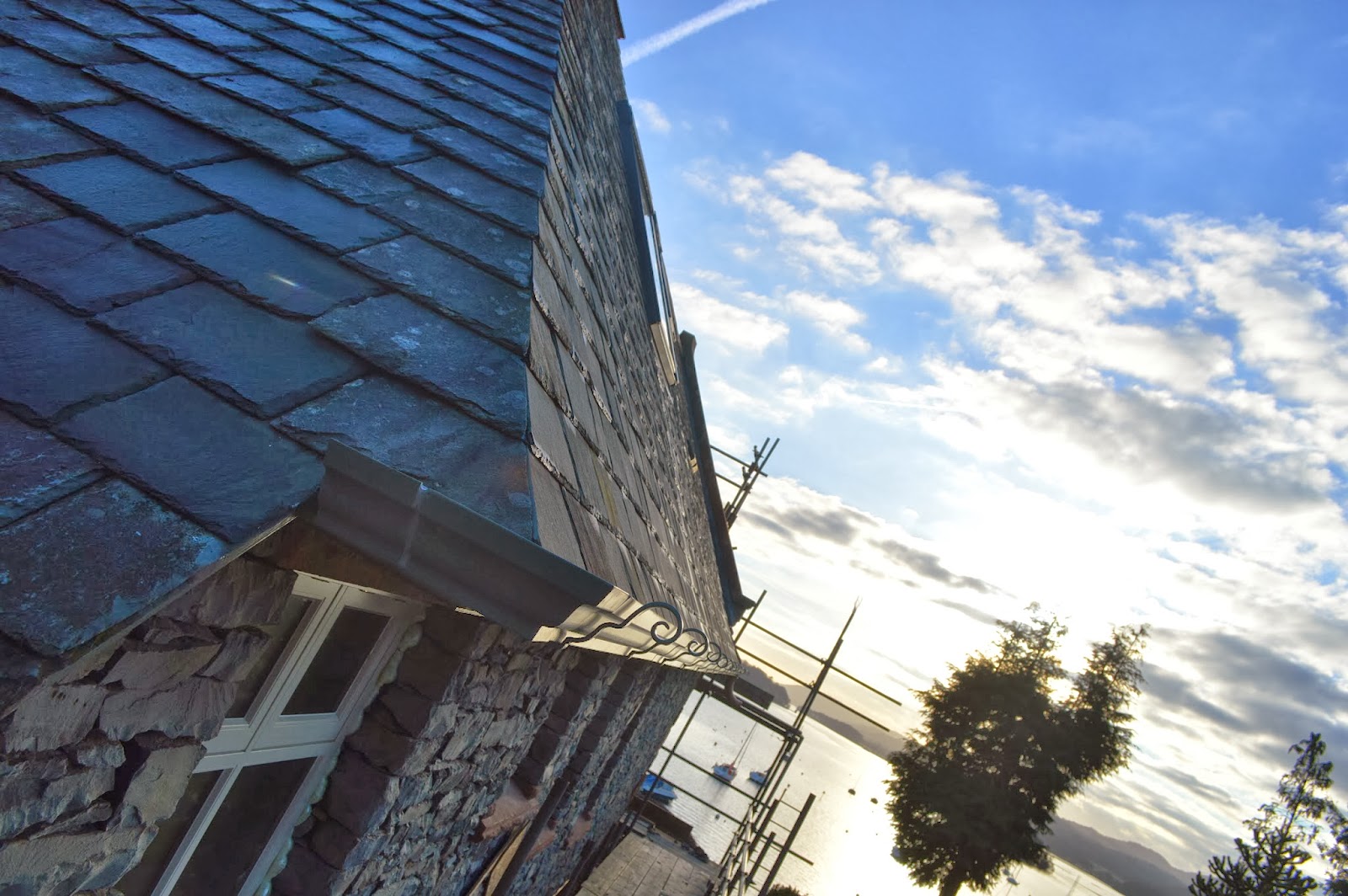 The property was originally 1 large residence latterly converted into two separate houses. Over time the East side has remained habitable and relatively well maintained but the West wing has sadly fallen into a poor state. We now have the job of reconnecting the two wings to return the house to its former glory.
The property is a traditional 19thCentury Lakeland slate building with sandstone quoins and lintels. The phases of the project have consisted of
??Stripping out of the West side and demolition of the coach house.
??Breaking the window and door openings out and reclaiming any materials that can be re-used. Many of the door and window openings had been altered in size using concrete lintels and quoins that were uncomplimentary to the existing building. 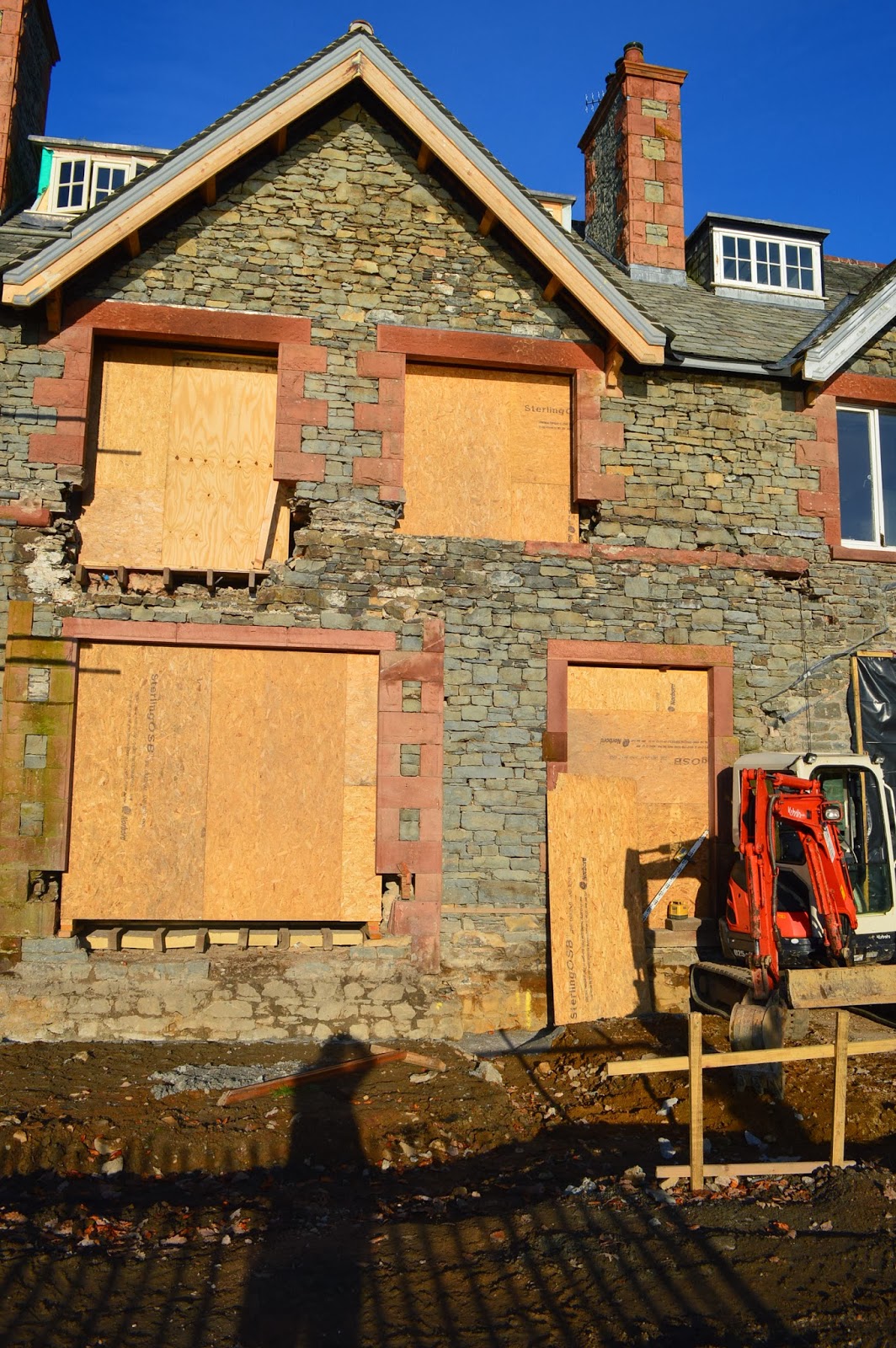 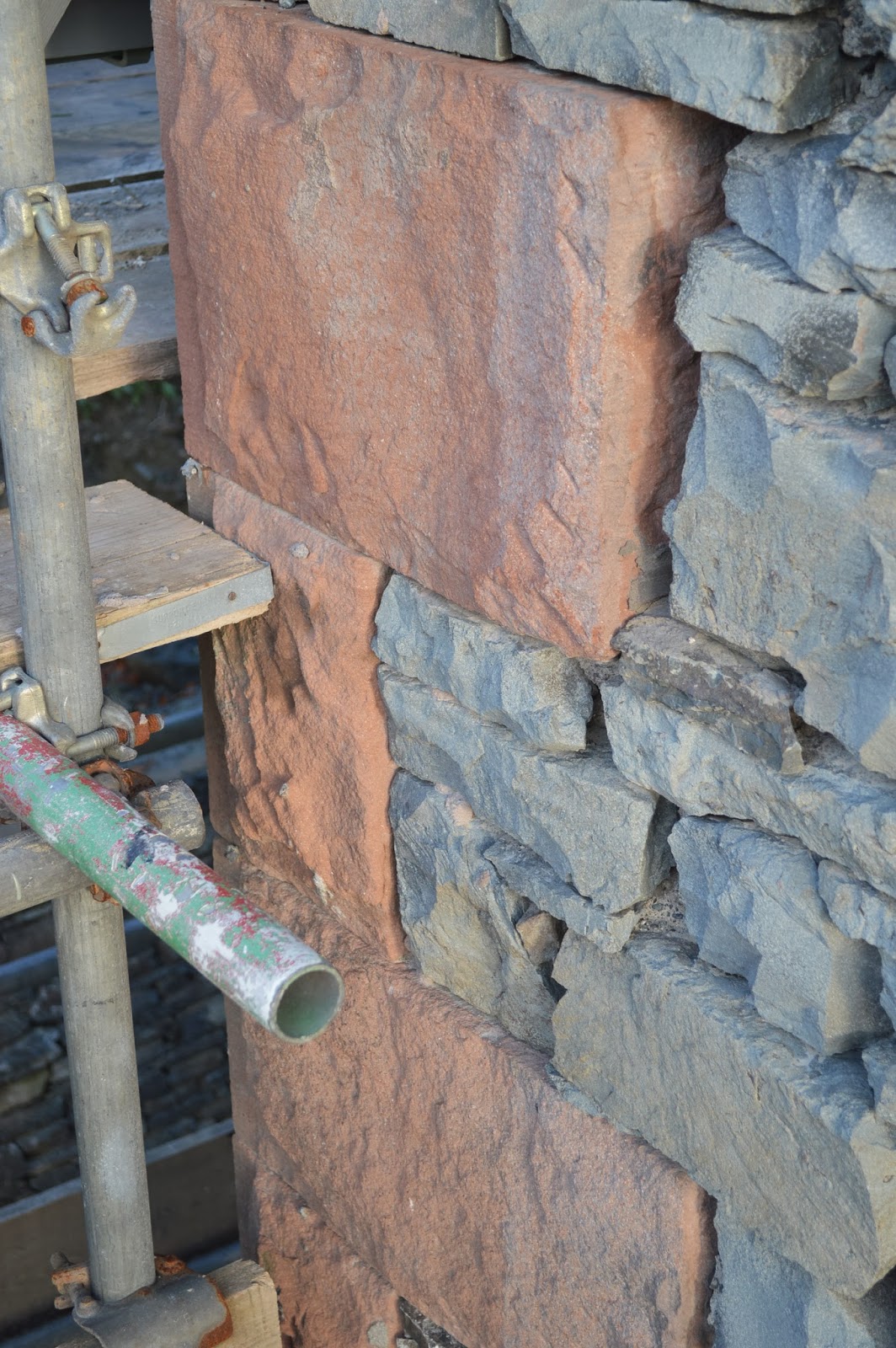 ??An entire re-roof to the west wing, we recovered and reused as much slate as possible and reclaimed green Lakeland slate was used to replace deteriorated slate. The roof was slated in traditional diminishing courses using two shoulder holes as the property is very exposed to prevailing winds, the slates were fixed using copper nails so the roof will last the duration.
??The chimney stacks were refurbished and re lined to rectify and prevent future water ingress.
??Many of the window sills and lintels were replaced with carefully sourced sandstone and cut to match the existing openings. 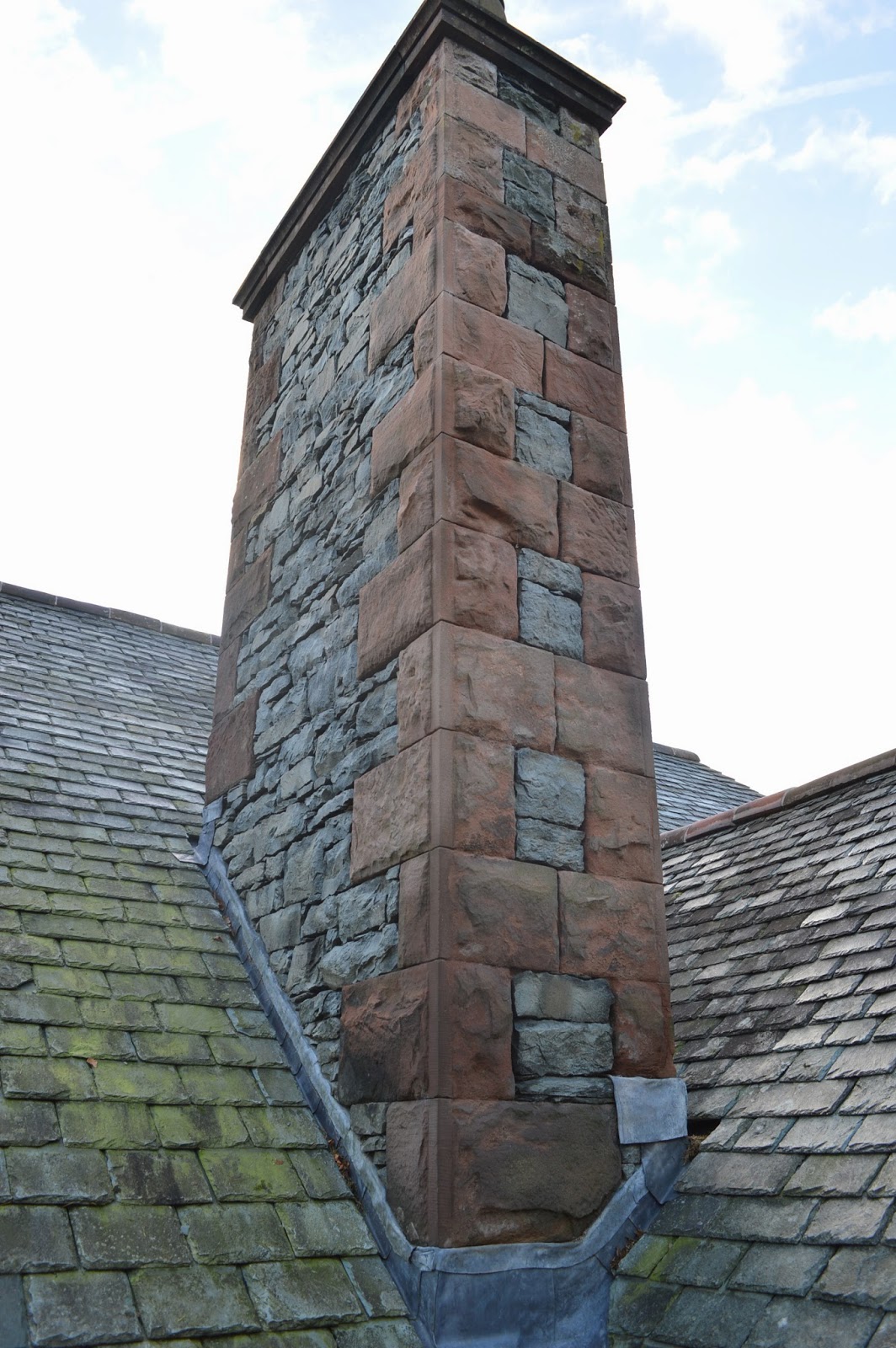 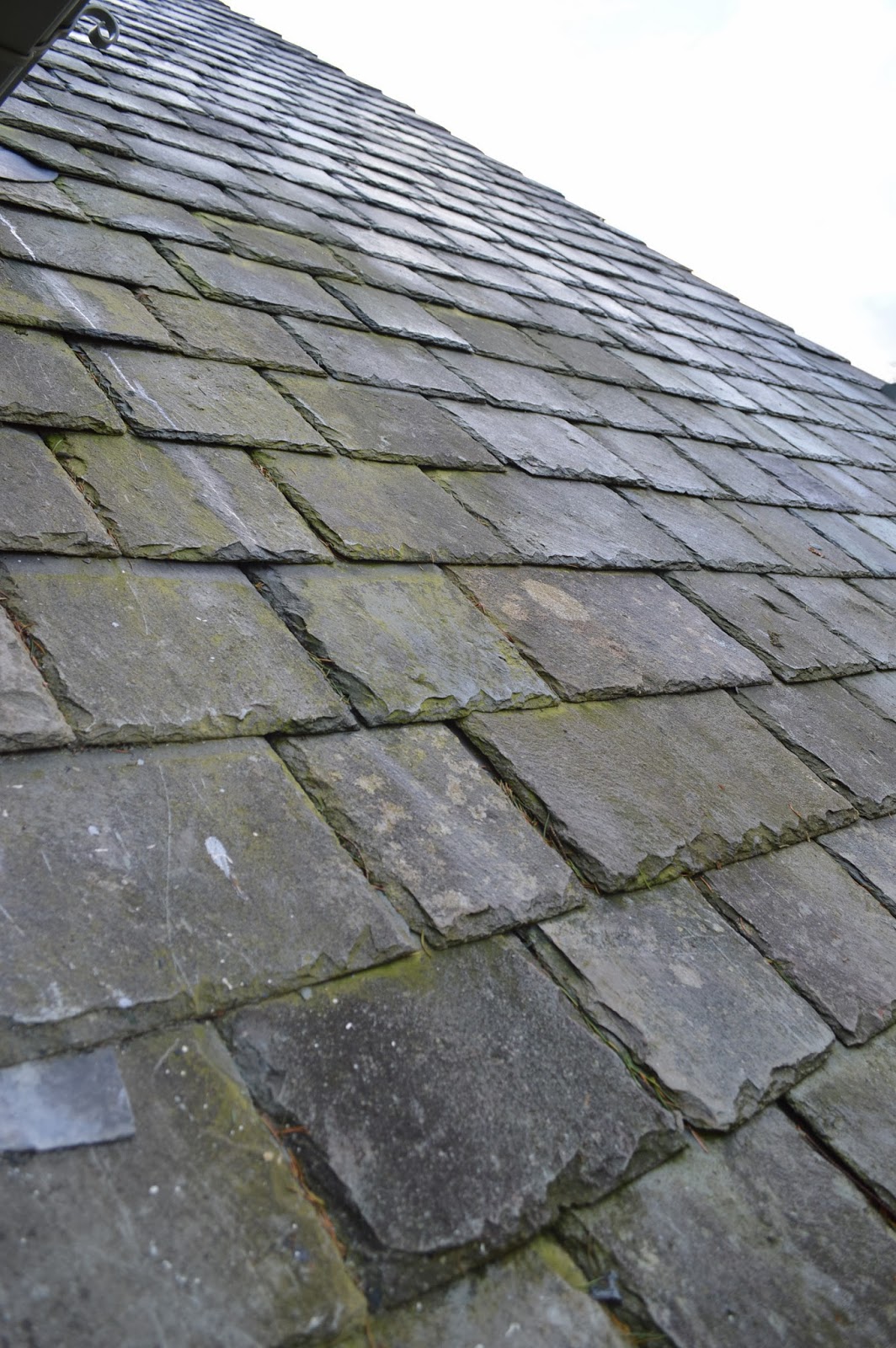 ??All the external stonework and chimney stacks were sand blasted to improve the look of the stone work and give the building a ???face lift???. 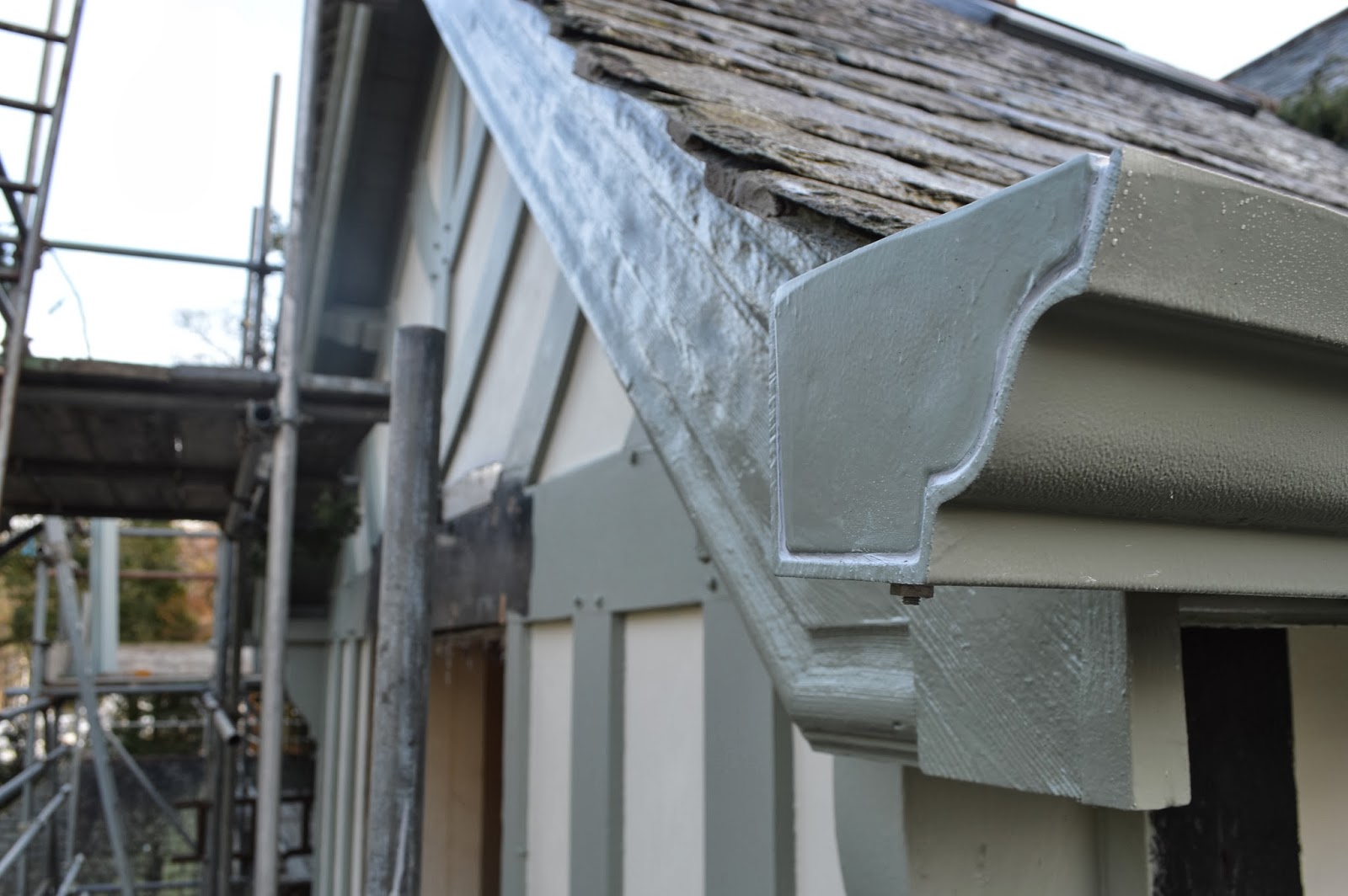 ??All windows to the west wing were replaced using hardwood and were pre-painted prior to installation for added protection, these will be brush finished in the same colour in-situ to create a natural grained finish, in the east wing key features like stain glass windows to stairways have been carefully removed and are undergoing refurbishment by a skilled stain glass specialist.
??A new conservatory is under development and will be completed in the next couple of months.
??Internally the house will be refurbished to a high standard, the work will include a new oak staircase with stain glass window features. The original elaborate coving has been conserved where possible and will be matched with new to the same design. The wood panel window jambs will be similarly used where possible.